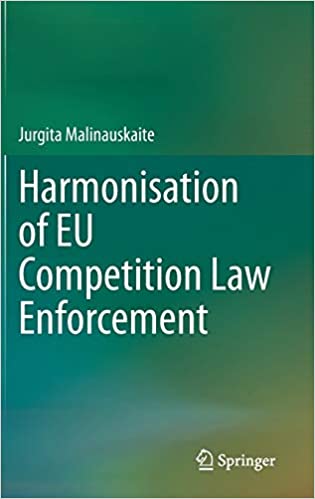 Jurgita Malinauskaite’s latest work analyses the development of public and private European competition law enforcement from a historical and legal perspective. The book’s main purpose is to explain how both ways of enforcing competition law in the European Union have been harmonised, albeit not in parallel.

The book explores how the EU’s enforcement of competition law has evolved from a centralised regime under Regulation 17 of 1962 (by which the Commission was willing to ‘authorise’ conduct to provide certainty as to its legality), to EU Regulation 1/2003, which brought in the current regime that requires self-assessment of conduct and empowers National Competition Authorities to apply EU law in parallel with national rules. While describing this development, the book analyses harmonisation throughout almost two decades of enforcement of EU competition law in cartel and abuse of dominant position cases. It deals with the extent to which comparative studies have been undertaken in order to enhance the harmonisation process at both EU and Member State levels from a historical perspective, while cooperation throughout this process has been fundamental.

Malinauskaite then considers the role of competition law in assisting the evolution of Central and Eastern European countries from a Socialist legal system to a Civil law system, a process that was not always easy, including because it involved the transition from centrally-planned to market economies, which required the defence of free competition, together with structural changes such as trade liberalisation and privatisation.

Malinauskaite investigates the development of public and private enforcement, covering Directive 2014/104/EU (the Damages Directive, which was fully transposed into national laws between the end of 2016 and the first half of 2017) and Directive 1/2019 (the ECN+ Directive). That Directive still has to be transposed by February 2021, and seeks to make National Competition Authorities apply EU Competition Law more effectively, subject to the principles of equivalence and effectiveness established by the European courts. The ECN+ Directive will also require Member States to accept some minimum procedural rules determined by the EU.

The book examines the preparatory works that led to the approval of the public and private enforcement legislation, in order to evaluate whether the intentions of the EU legislator have been complied with. It also analyses details of the instruments employed in litigated competition cases enabled as a result of the Damages Directive, such as the disclosure of evidence, the joint and several liability system, the presumption of harm in cartel cases, the passing-on defence, and the lack of harmonised collective redress mechanisms. In doing so, the book always keeps an eye on how the relevant principles have been implemented in Central and Eastern Europe.

Finally, the book explores the extent to which the harmonisation of the European competition law enforcement framework has been implemented in the legal systems of Member States, and reflects on whether it has led to the fragmentation of the national regimes in Central and Eastern Europe.

Malinauskaite’s work adds a lot of value in the analysis of the evolution of EU Competition Law enforcement over recent decades towards a more harmonised approach throughout the EU. We learn that the harmonisation project has been largely successful.  And we see the introduction in the EU of an instrument that has traditionally been more prominent in the US: private litigation in competition law infringements. EU competition law has traditionally been enforced publicly, even though the possibility of victims claiming damages suffered by an anticompetitive infringement has always existed. This area will grow in importance through the creation by the Damages Directive of a harmonised level playing field for victims of anticompetitive infringements throughout Europe.

Patricia Pérez Fernández is a practising lawyer in EU and Competition Law. She holds a PhD and is Adjunct Professor at IE Law School and the University of Castilla-la Mancha. She recently published a book on private enforcement of competition law (‘Acciones de responsabilidad civil por ilícitos anticompetitivos’, Wolters Kluwer, 2019).
×